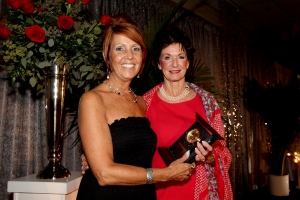 Cyndi Scarpelli, Vice President/Sales Manager of the Beavercreek Sibcy Cline office has been named the company’s Community Service Award winner for 2014. She received this honor at the company’s Celebration of Success on September 4, 2014.

Cyndi’s volunteerism is extensive: She has volunteered at local soup kitchens; Rebuilding Dayton Together (neighborhood revitalization projects); sponsored children through Compassion International; and is involved in Cancer Hope Ministry, where she writes notes of encouragement to those who are suffering with cancer.

In 2006, Cyndi (along with two other friends) formed the “Three Hearts Committee” to sponsor an annual Valentine’s Day Dance to support various charities. The sell-out dance has benefitted Habitat for Humanity; The Other Place (helps to end homelessness in Dayton, Ohio); as well as A Special Wish Foundation (which grants wishes to children with life-threatening illnesses.) Gary Auman, a board member of “A Special Wish Foundation” says of Cyndi, “She is a very giving and dedicated lady who puts her whole heart into making the event one to remember and provide the maximum benefit for our Wish Kids! Over the years that Three Hearts has held the dance benefitting Wish Kids we have averaged over $50,000 each year.”

Says Cyndi, “My motto is to remember that making a living is not the same as making a life.  I truly believe not to let a day pass without making it count.”