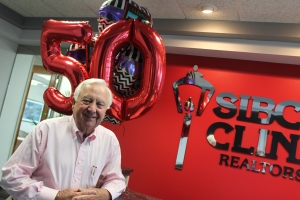 Rob Sibcy is celebrating his 50th anniversary in real estate! Let’s take a walk down memory road with him:

Rob says he remembers riding to real estate appointments with his father when he was a kid and found it exciting. He knew that one day he would become a real estate agent, too.

It was summer 1965 when Rob obtained his real estate license. He had just graduated with an Economics degree from Washington and Jefferson College in Pennsylvania. His father, Bob, owned Sibcy Realtors with one office and 15-20 agents. 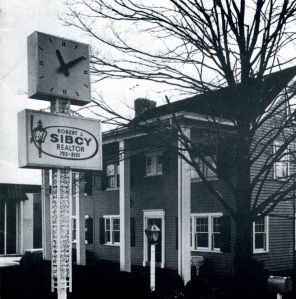 There was no internet. No cell phones. No fax machines. No listing presentation materials. And that was no problem! Rob recalls working very hard to get listings and sales. He attacked the business with full energy by arriving early to work – many times by 7:30am – and taking all calls way before anyone else was at the office. Floor phone time was opportunity time to Rob.

He also took on all real estate business – including business that other agents did not want. The MLS existed at that time, but it was all paper driven. Updates were made to the MLS books and shared among agents. An open house was from 1-5pm on Sundays and you stayed there all afternoon. Advertising meant placing ads in the Cincinnati Enquirer.

Rob’s First Sale
With no training offered at the office, Rob’s first sale was a little unnerving. The client wanted to place an offer on a home in Oakley for $15,500 and Rob did not know how to complete a sales contract. Quick thinking – Rob told the client not to worry – that the office had a “contract specialist” (Frank Gray) who would work on the paperwork. Thank goodness Frank was in the office when Rob and the client arrived! Frank showed Rob what he needed to do. Rob then studied the sales contract later and had that part of the business under his belt.

From August through December 1965 Rob earned $3,800. In his first full year in business he earned $14,500 and by the second year had made $37,000. He prospected all of the time by talking and meeting with people. And he prospered. Fellow agents were amazed.

Rob Becomes President When 25 Years Old
In the late 1960s Rob’s father suffered a heart attack and several strokes. He was unable to work again and later passed away. There was to be no grooming of Rob to take over the business. He had a decision to make – either work as a real estate agent for someone else or stop selling and provide leadership for Sibcy Realtors. It was 1968 and he became president of Sibcy Realtors. His goal was to encourage his agents and grow the business. “I was a sales agent one day and president of the company the next,” Rob recalls.

Despite the recession of 1969 and the need to learn the business, Sibcy Realtors thrived under Rob’s leadership. “There was no option,” he says. “And my father’s illness was certainly strong motivation.” In 1971, Rob married the former Pamela Dixon.

When Rob was named president, the company had one office and 15-20 sales associates. He added offices in Milford and in Anderson. All of the Sibcy locations were houses converted into offices. The Anderson office had two sump pumps and it still leaked water.

The 1980s – Sibcy Cline Realtors
In 1980, Rob acquired the Robert A. Cline Company and Sibcy Cline, Inc. was born. At that time, Sibcy Realtors had six offices and 150 agents and the Cline Company had 12 offices and 235 agents. The merger had started with a chat in 1978, and later quickly happened within 30 days following another phone call in 1980.

Following this merger, skyrocketing interest rates happened and the company limped through trying times with mortgage rates heading near 19%. There was not a lot of real estate business in 1981 and 1982.

In the mid 1980s, Rob also invested in VideoWorks and began videotaping homes. Later “Sibcy Cline’s Home Videos” became a weekly television show with “30 homes in 30 minutes” on Sundays at noon on Channel 12. The television show ran for 10 years until 1995 when Sibcy Cline started promoting homes on the Internet. (Sibcy Cline was the second real estate company in the U.S. to have listed homes on the Internet.)

Rob was motivated to keep growing the company from the mid 1980s into the 1990s and turn of the century. Today, there are 22 Sibcy Cline branch offices with 1,300 real estate agents in Cincinnati and Dayton, Ohio; Northern Kentucky and Southeastern Indiana.

So 50 years later – from 15 agents to 1,300 – Rob says it all has happened so fast. He has shown his commitment and his positive attitude – as well as the willingness to try new things along the way. And most importantly, Rob has appreciated the people – Sibcy Cline’s agents and employees – that have made Sibcy Cline Realtors what it is today – a well-respected local company with international reach and strength.

And, we cannot forget that Sibcy Cline Realtors is a family owned and operated business. Wife, Pam, and daughter Robin Sheakley are involved on a daily basis with Marketing and Core Services as well as Second Story Auctions. Rob and Pam also have one other daughter, Shannon Warren (who is a Sibcy Cline agent), and son, Nelson. There are five grandchildren who all live in Cincinnati. Two of Rob’s sisters, Patti Sibcy and Cindy Sibcy, have also been part of the business in sales and/or management.

Congratulations to Rob Sibcy on celebrating 50 years in real estate!