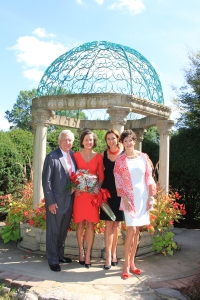 Julie K. Back, Executive Sales Vice President for the Sibcy Cline Hyde Park office, has been named Sibcy Cline’s #1 Agent (Leader of the Year) for the company’s fiscal year of 2014-2015. This is the fourth year in a row for her to receive this honor. Julie was also recognized on September 20, 2015 in Columbus, Ohio by the Ohio Association of Realtors as the #2 agent in sales for the state for individual sales dollar volume.

Julie began her real estate career with Sibcy Cline in 1994. Throughout the years, she has received many sales honors and accolades. In addition to being the top agent for Sibcy Cline from 2012-2015, she has been among the top 5 agents in sales for Ohio since 2011:

The Ohio Association of Realtors has over 26,000 members and is the largest trade association in Ohio.

Rob Sibcy, president of Sibcy Cline Realtors, says, “We are so very proud of Julie. To be at the top for SIbcy Cline as well as the number two agent in the state takes extreme dedication and true passion for the real estate profession. We are very happy to have her as part of the Sibcy Cline team.”

David Hummel, Vice President/Sales Manager of the Sibcy Cline Hyde Park office says, “Julie is a very positive person whose top priority is the satisfaction of her clients. She works tirelessly for them. Her passion for real estate is to be commended and we are thrilled that she has been honored by Sibcy Cline and the Ohio Association of Realtors.”

Rob Mahoney, Associate Manager adds, “Julie is very committed to her clients and I cannot say enough about her work ethic. She is in constant communication with them and is very focused on their needs. What an honor for her to be the top Sibcy Cline sales agent for the fourth year in a row and to be among the top for state!”