The British are leaving! The British are leaving! Britexit has been all over the world’s news. If you’re an Anglophile, you have been following this news intently. Well, English lovers, we have some good news for you – Second Story Auctions is currently selling some fabulous English antiques and furnishings in its online sale this week that ends on July 19, 2016 at 8pm. Here is the story behind these beloved items:

Pat Dugan is from Manchester, England. In 1985, she and her husband, Ted Atkinson (an aeronautical engineer) moved to Cincinnati with GE Aviation. As they prepared for their move across the pond, they thought that if they could not live in an English home that they would bring that English home with them.

They packed their English antiques as well as reproductions and moved to a seven-acre farm near Morrow, Ohio. Years sped by quickly and sadly Pat’s husband passed away. She then moved on with her life and made her way to Oregon with her companion, Barbara. Her English belongings also relocated and the two enjoyed entertaining with the fine china, crystal and silver from England.

However, life changes and Pat’s focus did, too. She found that her beloved belongings were not as special to her at this point in her life. She and Barbara decided to downsize their ocean-view home to a motor coach so they could travel and visit with family and grandchildren who lived on the eastern side of the country. They also wanted to avoid Cincinnati winters. Pat was ready to let go of her treasures and let them have a new story with someone else.  And that is when many of her belongings with English roots made their way to Second Story Auctions. 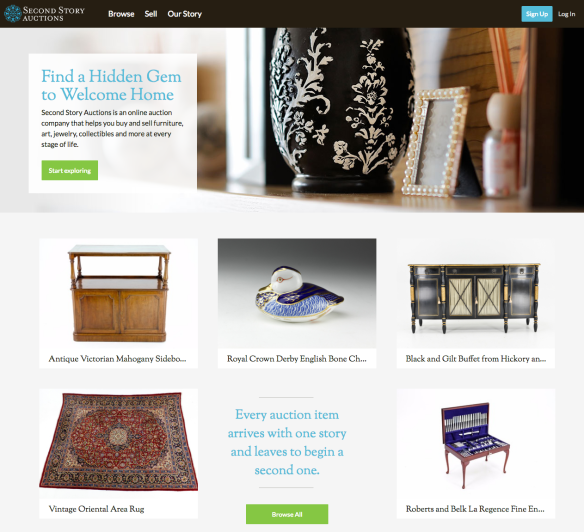 Some of Pat’s favorite items in this auction include:

Genuine Victorian Sideboard
Says Pat, “I’ve always know it as a dumbwaiter. It’s genuine mahogany. Ted’s mother purchased it used for half-a-crown (now worth about 20 cents) after she was married, just before or after the Second World War. If you look closely on the edge, I was told Ted hit it with his toy plastic sword, and there are some slight marks. I think of them as character.”

Custom Grandfather Clock
“There’s nothing more English than Westminster chimes (Big Ben). This was made for us by a Leicester clock maker.”

Look at all of the wonderful items for sale from Pat Dugan on Second Story Auction’s website. Act fast – these English items are only up for sale through July 19th at 8pm. You are sure to find that special something for your home. Create your own story with a special treasure!