Oakwood is located south of downtown Dayton, Ohio and is recognized for its charm and tradition. This highly walkable city is “urban sophisticated” – from its interesting historic background, to the wide variety of home styles, to its strong sense of community.

History
Oakwood was established as farmland in 1804 by Colonel Robert Patterson. The area was later incorporated into a city in 1908 by Henry Patterson, the founder of the National Cash Register Corporation. In the late 1800s, homes in Oakwood mostly consisted of summer residences and horse estates.

In 1913, following the Great Dayton Flood Great Dayton Flood that ruined much of downtown Dayton, many people began looking to build homes in Oakwood which was 275 feet higher in elevation. During the 1920s and 1930s, Oakwood grew rapidly. A streetcar system easily connected people to destinations. With World War II, Dayton prospered with manufacturing and engineering jobs and Oakwood grew and more homes were constructed. Later in the 1960s and  1970s, larger estates like the Schantz Historical District, were subdivided for the construction of more new homes.

Today, there are now 9,200 residents in Oakwood. One of the most-famous Oakwood residents was Orville Wright, a pioneer in aviation. His home is called Hawthorne Hill and is located at the corner of Harman and Park Avenues.

All Kinds of Home Styles in Oakwood
Oakwood is a community of urban-planned streets with the use of boulevards, median landscaping and community parks that create beautiful streetscape vistas. It is known for its tree-lined streets and homes that are pleasant looking with various styles of architecture. You will find Tudor, Colonial Revival, Gothic Revival, Italian Renaissance, Spanish Eclectic, Mission, Prairie, Craftsman, Swiss Chalets, Queen Anne, Beaux Arts International as well as White Clapboard Colonial houses, among other home styles. Just walk the streets in Oakwood and take in the beautiful diversity of its homes. (See samples of homes below…)

The city takes pride in having beautiful residences and bestows awards to houses that maintain the best standards in aesthetics with the Oakwood Beautification Award Program. Oakwood has strict zoning to maintain its high benchmarks  for appealing home sites – no chain-link fences are permitted and all exterior utility units (such as an air conditioner) must be hidden from street view.

Schantz Park Historic District
The Schantz Park Historic District features wonderful representations of 20th century American architecture. The area was established by Adam Schantz, a German immigrant and successful entrepreneur in the meat packing and brewery businesses. His goal was to convert his 108 acres into the best residential Dayton district away from the noise and pollution of Dayton’s city center. Frederick Law Olmstead (designer of New York’s Central Park) was appointed to landscape Schantz Park. Homes in the Schantz District were planned for people of various economic levels. Specifics were set in place for high standards in house size and set backs from the street. Today, you will find many home styles as you stroll from block to block through this district. Go here to see a map of a self-guided walking tour of this district.  Here are a few samples of homes found in this district: 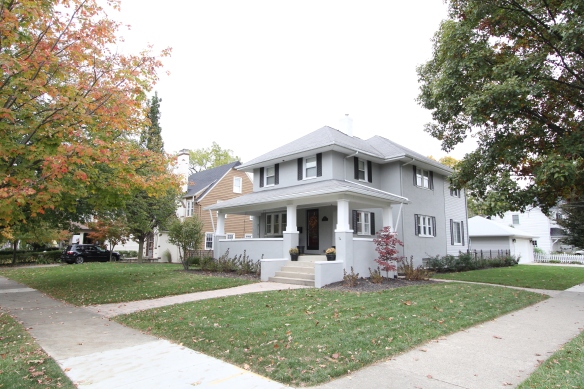 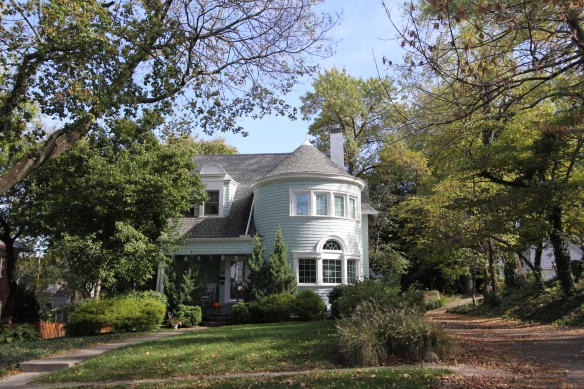 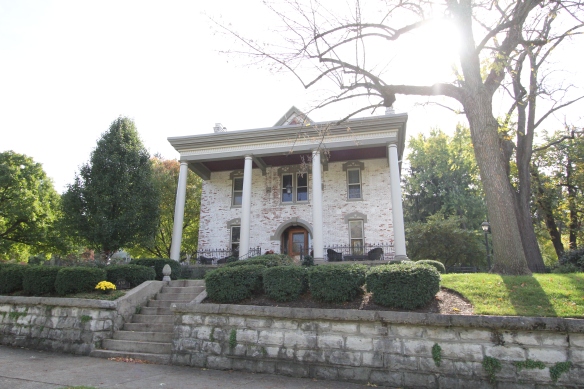 Hawthorne Hill
Located on Park Avenue, Hawthorne Hill was home to Orville Wright. The home is named after Hawthorne Street where the Wright brothers grew up in the City of Dayton. The home later served as a corporate guest house for the National Cash Register Company (1949-2006) and was then donated to the Wright Family Foundation for preservation. It is listed on the National Register of Historic Places.  Learn more about this home here.  Here is a photo of this special home:

Long-Romspert Homestead
The Long-Romspert Homestead is also on the National Register of Historic Places and is one of the oldest homes in Oakwood. It was built in 1863 and was owned by one family and their heirs until it was donated to the Oakwood Historical Society in 1985. Here is a photo of this home:

Oakwood is Green
Oakwood loves its trees. The city has an annual Johnny Appleseed Street Planting Project. These new trees are planted in the city right-of-ways.

Sister Cities
Trés chic! Oakwood is proud to go international with two sister cities: Le Vésinet (suburb of Paris, France) and Outremont (Montreal, Canada). The city also has a friendship pact  with Unterhaching (Munich, Germany). Oakwood enjoys exchange programs with these cities and you can follow activities on their Facebook page.

Oakwood Parks and Gardens
The city has many parks and gardens to enjoy. Here is a list of some of them:

Wright Memorial Library
This library was established by Orville Wright and opened in 1939. Do not attempt to read the Egyptian hieroglyphics over the front door as they are for decorative purposes only! This popular public space is busy and has meetings rooms available  for civic, education and cultural events. Any Ohio resident is eligible for a library card here. The building is listed on the National Register of Historic Places.

Oakwood Community Center
The center is near Shafor Park and is home to many community programs. The Gardner Memorial Pool and six tennis courts are located at the center.

Shopping and Dining
Oakwood residents enjoy Dorothy Lane Market, a family-owned grocery store in business since 1948. Residents enjoy shopping  at The Shops of Oakwood on Far Hills. From fashionable clothing to books and restaurants, this shopping area offers many options.

Throughout Oakwood, there are great dining experiences to enjoy: The Pine Club (named one of the USA’s Best Steakhouses this restaurant is technically Oakwood “near”);

Community Events
Oakwood residents enjoy many things to do throughout the year in their community:

Look at homes for sale in Oakwood here.