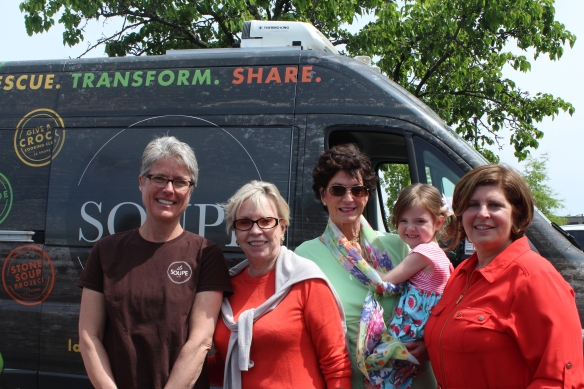 About La Soupe
La Soupe is a non-profit agency (founded by local chef Suzy DeYoung in 2014) that rescues food by converting it into soup which is then donated to people in need of sustenance. Donated ingredients are turned into fabulous-tasting soups, salads, frozen meals and desserts. The organization receives food and monetary donations from individuals and companies. Partnerships include Kroger, Jungle Jim’s, Sugar Creek, Chefs’ Warehouse, Farmer Family Foundation as well as many local organic farms.

Each month about 4,000 pounds of produce is collected and 60 volunteers help transport the food to local chefs for soup creation. Those soups (as well as fresh produce) are then taken to local churches and schools to be distributed to those who live in “food deserts” – without  easy access to healthy food.

The public also gets involved with La Soupe by purchasing their soups and salads. The Soupe Shack is located in at 4150 Round Bottom Road in Newtown. Follow La Soupe on Facebook so learn about their daily menus.