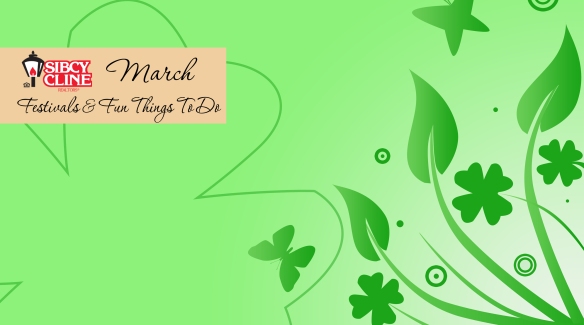 Enjoy a fun community event or festival during March. There are home and garden shows, plays, Bockfest, a St. Patrick’s Day Parade,  bacon fest (yum!) and so much more going on throughout Cincinnati and Dayton, Ohio; Northern Kentucky; and Southeastern Indiana.

The Last Wide Open
Through March 10, 2019
Cincinnati Playhouse in the Park at 962 Mt. Adams Circle, Cincinnati, Ohio
A romantic play!

Hamilton
Through March 10, 2019
Aronoff Center, downtown Cincinnati, Ohio
This smash hit will be a sell out!

Always Plenty of Light at the Starlight All Night Diner
Through March 16, 2019
Know Theatre of Cincinnati at 1120Jackson Street, Cincinnati, Ohio
An asteroid threatens the earth and you escape to a diner (which might be a time machine)

Around the World in 80 Days
Through March 17, 2019 (various dates)
The Human Race Theatre Company at the Loft Theatre at 126 N. Main Street, Dayton, Ohio
The classic tale is brought to life in this play

Egypt: The Time of Pharaohs
Through August 18, 2019
Cincinnati Museum Center at Union Terminal at 1301 Western Avenue, Cincinnati, Ohio
Learn about daily life during the time of the Pharaohs

27th Annual Bockfest
March 1–3, 2019
Bockfest Hall and various venues in Over-the-Rhine in Cincinnati, Ohio
Celebrate the Coming of Spring, Over-the-Rhine’s brewing heritage, and bock beer at the largest Bockfest in the United States

The Hunchback of Notre Dame
March 7-10, 2019
Corbett Auditorium
Musical based on the animated version of this 1830 novel

Life on the Vertical
March 10–11, 2019
Victoria Theatre at 138 North Main Street, Dayton, Ohio
National Geographic Live! Learn about rock-climbing some of the tallest walls in the world

Rumpelstiltskin
March 15–17, 2019
Children’s Theatre of Cincinnati, Madisonville, Ohio (and other touring locations)
The classic tale of a miller’ daughter , her father and a prince

On Your Feet
March 19–24, 2019
Aronoff Center, downtown Cincinnati, Ohio
A musical about Gloria Estefan coming to America and rising to the top

The Lion in Winter
March 22 – April 6, 2019
Falcon Theatre at 636 Monmouth Street, Newport, Kentucky
Comedy and drama with this play about the English Plantagenet family

Opening Day in Washington Park
March 28, 2019
1230 Elm Street, Cincinnati, Ohio
Starts at 10am with music and games. Watch the parade pass by@